skip to main | skip to sidebar

A VISIT TO THE MOST HAUNTED VILLAGE IN ENGLAND 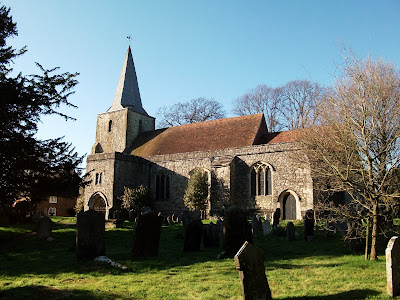 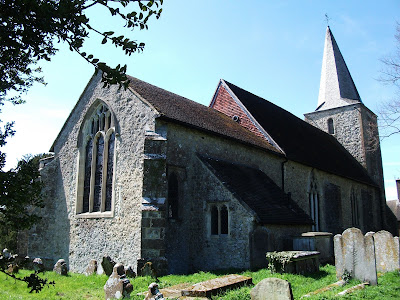 The eastern end of the beautiful 13th century sand-stone Church

The church and the churchyard are reputedly haunted by two female ghosts who were members of the Dering family. The 'Red Lady' married into the Derings and she is said to wander among the graves mournfully in search of her baby who died at birth and was buried in the churchyard in an unmarked grave. It is a possibility that the child was illegitimate and was therefore not allowed to rest in the Dering vaults inside the church. The mother (the 'Red Lady') died not long after and rests in the family vaults.﻿ 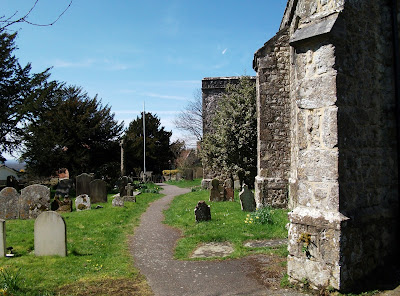 Pathway to the entrance of the Church
The other female ghost who haunts this location is the 'White Lady' who was the beautiful wife of Lord Dering. She sadly died young and his Lordship, wanting to preserve her beauty, had her laid in an airtight lead coffin wearing a white dress and holding a single red rose upon her breast. There was then a further series of lead coffins and finally she was sealed in an oak coffin and placed in the Dering chapel. The 'White Lady' walks within the church near to her vault in the Dering chapel. 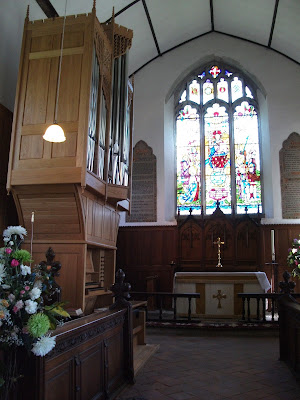 The Church has two isles and two chancels 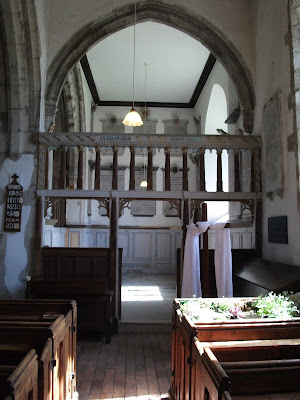 The Dering Chapel
The south chancel is dedicated to the Blessed Virgin Mary and belongs to the Dering family who were Lords of the manor from the 15th century to the early 20th century. Richard Dering of Surrenden esq rebuilt the chancel in 1475. There are frequent lights seen and knockings which eminate from the burial vaults. 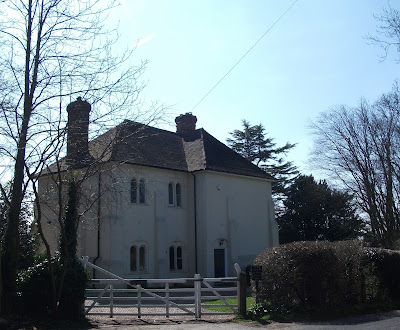 The house on Station Road was built in 1863 and from 1890-1924 it was the residence of the local curate and was known as the Rectory Cottage. The house and the lane outside is known to be haunted by the spirit of a monk who at one time lived at Greystones (or possibly another house which stood on the same site). It is said that the monk was infatuated with a lady who lived at nearby Rose Court. 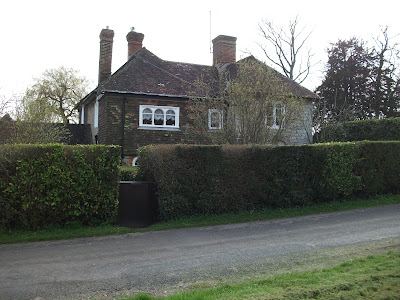 Rose Court House
Rose Court is dated somewhere between 1660 and 1760 and it is haunted by a lady who was the mistress of a member of the Dering family. The monk who lived at Greystones fell in love with the lady and when the lady killed herself from eating ivy and poison berries, the monk is said to have died shortly of a broken heart. A good story, even if the facts don't fit completely as Greystones house was built later in 1863 and the lady is definitely from the Tudor period, but maybe there existed a previous house at Greystones? The haunting is said to take the form of whispers and snatches of conversations being heard and dogs barking. 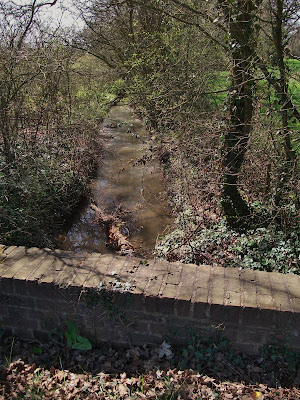 Pinnock Bridge
Crossing the Pinnock stream, Pinnock bridge seems like any ordinary little bridge, but there is a tale of an old gypsy woman who would gather watercress from the stream. After her toil, she would sit upon the side of the bridge to smoke a pipe and drink gin. On one fateful day she spilt her gin down her shawl and a spark from her pipe ignited the alcohol and she went up in flames. The ghost of the old gypsy woman has been seen on many occassions sitting on the wall of the Pinnock bridge. 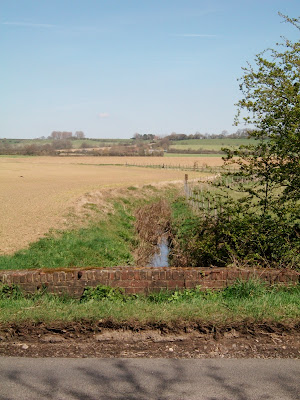 Pinnock Bridge (opposite side) 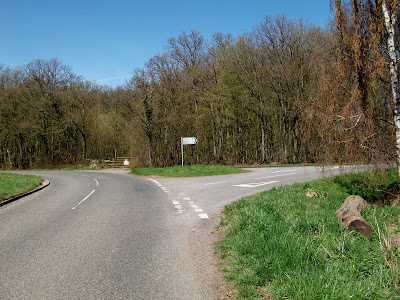 Fright Corner and Screaming Woods
A highwayman reputedly haunts the location at Fright Corner. At the road junction, on the triangular, grassy mound of earth where there is now a signpost, there once stood an old hollow tree. It was the favoured haunt of a local highwayman who liked to lurk in its trunk and jump upon unsuspecting victims. One man, hearing of this, decided to venture to Fright Corner and finding the tree, thrust his sword hard into the trunk, thus ending the highwayman's life and criminal ways!  The woods near here were called Fright Woods but were later changed to Frith Woods. Just along the Smarden Road taking the left turning, you will find the entrance to Dering Wood, known locally as 'screaming wood'. It is said that those who foolhardedly venture into the woods at night will hear a tormented and agonising scream from deep within the woods. 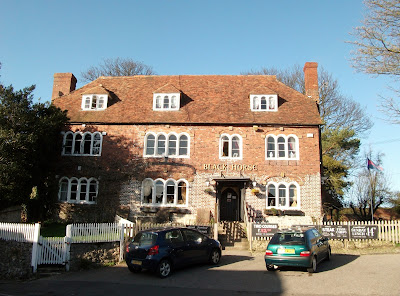 The Black Horse Inn
This 14th century Inn was originally a farmhouse that was encircled by a deep moat. The Inn also served as the house of the local bailiff from where the Dering estate was managed. It is haunted by a playful spirit who likes to hide items belonging to staff and customers. 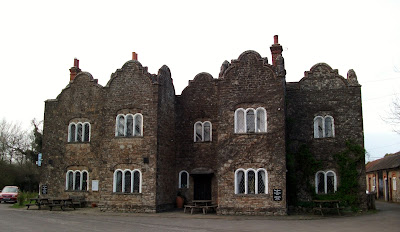 The Dering Arms
Built in the 1840's the Dering Arms was originally a hunting lodge and it stands at the approach to Pluckley Railway Station. It is said to be haunted by the ghost of an old lady who likes to sit at a table by the window and look out.
At approximately 11.30 p.m. on Saturday 20th April 2013 my fellow paranormal investigator and I decided to do some 'ghost-hunting' in the churchyard. Having previously been told by an investigator of 'Scream Paranormal' who were doing an investigation at the Black Horse Inn, that the wooden porch at the rear of the church is usually quite active, we decided to focus our attention there. After several minutes and no activity, I had the distinct feeling that we were concentrating on the wrong area and we decided to move closer towards the church. 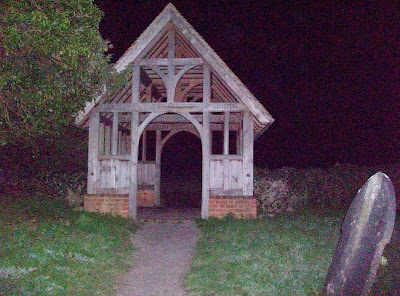 Porch at the rear of the Church. 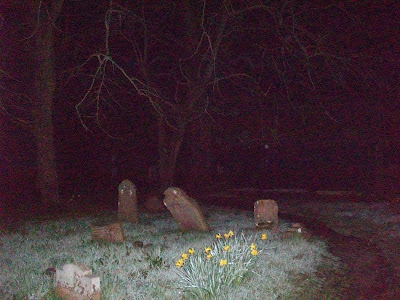 Churchyard
﻿
﻿
We took a sequence of eighty-four photos in the churchyard, all the time talking to and trying to communicate with the ghost of the 'Red Lady' who supposedly haunts this location. On reaching the small mound of graves (above) we both had the sensation that there was a presence nearby. Photos (using a flash) were at first taken at random and then hearing sounds as of someone walking close by, the camera was immediately turned towards the sound and the photo taken.﻿
﻿
﻿ 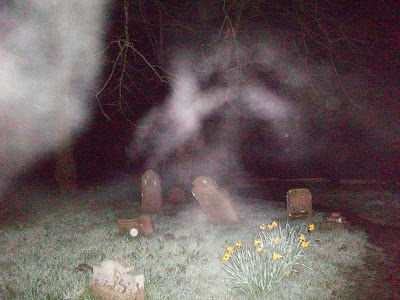 Is this the Red Lady?
The image above was taken after the previous photo and shows a strange mist that was not visible to our eyes. The mist seemed to appear sporadically in the same location as if circling us. Also notice the light anomalies (orbs).﻿
﻿ 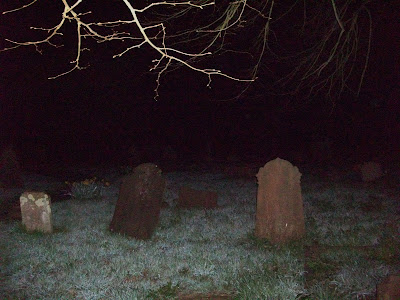 From another angle
At this point I began to make an EVP (electronic voice phenomena) recording, asking questions but on hearing it back nothing of any significance was captured.﻿ 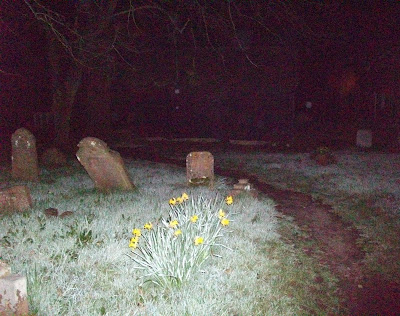 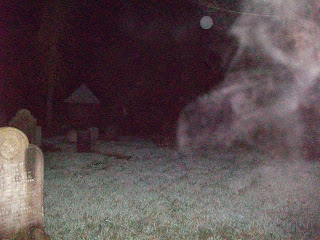 Mist and orbs (porch entrance in the background) 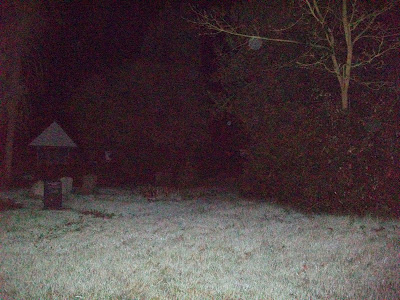 Seconds later, the mist is gone. 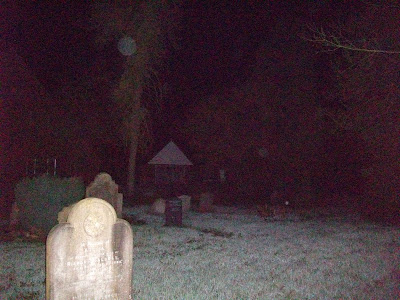 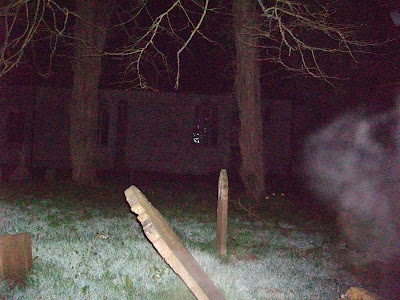 At the sound of twigs snapping, the mist returns 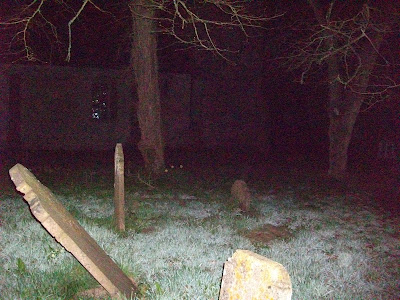 Seconds later, it is gone again 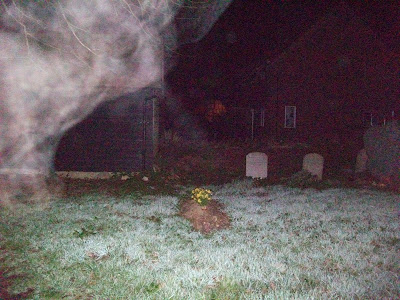 The fourth appearance of the mist 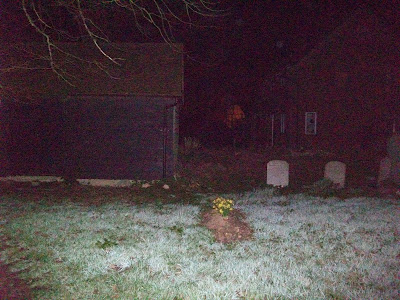 Instantly the mist has gone in the next photograph, seconds later 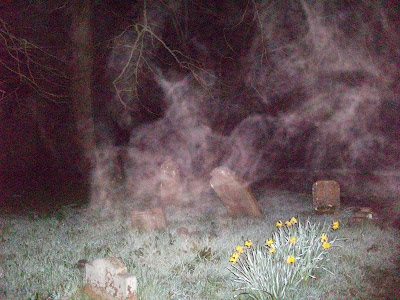 The mist begins to take shape once more 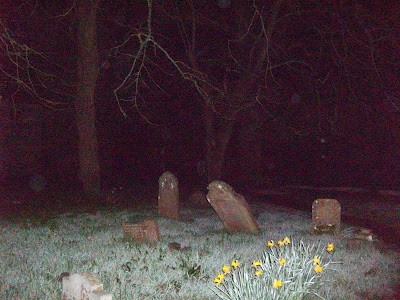 More orbs are visible
We took the photos while holding our breath to eliminate the possibility that we had caught this on camera. We also purposely breathed out while taking the photo and the camera did not show any signs of mist. It had been a reasonably hot day and the night had turned a little chilly but there was no visible breath or any natural 'mist'.﻿ 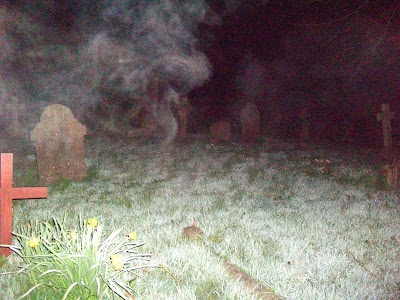 The last appearance of the spectral mist 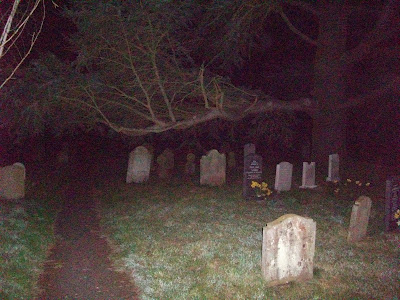 The last photo taken as the bells rung at midnight
Of the eighty-four photos we took many were found to show light anomalies and six of the photos had captured this peculiar mist which seemed to have an intelligence and motion of its own.
And so ended our investigation at Pluckley churchyard
﻿
Posted by audrarep at 10:03 4 comments: